Cat5 and Cat6 refer to category5 and category6 respectively of twisted pair copper wire cables. Both Cat5 and Cat6 have four pairs of twisted copper wire terminated by RJ45 connectors.   These cables are used for transmission of data. Telecommunication Industry Association (TIA) and Electronic Industries Association (EIA) define standards for network cables and based on these standards the cables are classified into different categories. All twisted pair cables are limited to a maximum run length of 100m for optimal performance.

Cat5 cable is a fifth generation network cable and the most popular one. The specification for Cat5 was defined by EIA in 1985 and is known as the EIA/TIA 568 Commercial Building Telecommunications Wiring Standard.  There are two types of Cat5 cables. One is unshielded twisted pair (UTP) which is commonly used in the US. The other is screened twisted pair (SCTP) which is more popular in Europe. SCTP cables have an additional layer of protection which acts as a shield against interference. Cat5 cables can support 10 or 100Mbps Ethernet and have a bandwidth of 100MHz. Another classification that can be used for Cat5 cables is solid and stranded. Solid Cat5 cables are rigid and more durable which makes them suitable for use as long distance cables. Stranded Cat5 cables are known for their flexibility and used often as patch cables.

Limitations: It is slower than Cat6 cables.

Cat6 is a sixth generation network cable which is more advanced and has better performance. Cat6 was defined by TIA in 2002 and is known as TIA/EIA-568-B.2-1 standard.  The structural addition in Cat6 as compared to Cat5 is a longitudinal separator which isolates the four pairs of twisted copper wires from each other resulting in reduced crosstalk, faster data speed and doubling of bandwidth. Cat6 cables support gigabit Ethernet and have a bandwidth of 250MHz. Cat6 cables with their advanced features symbolize the future of network cables.

Cat6 Residential Standards
There are two grades of Cat6 cables used in residential networks – Grade1 and Grade2. Both grades use a star topology. Both of them support services such as television, satellite, CATV and data. In addition Grade2 supports multimedia and other advanced services.

Comparisons between CAT5 and CAT6

To summarize the difference between the two categories of twisted cables, it can be said that Cat6 is faster than Cat5 but also more expensive. Most existing networks today are still based on Cat5. Cat6 is a good investment for the future but for Cat6 to be at its best, every component in the network must also be as fast as the cable. It is better to go for Cat6 only if the entire network can run at gigabit speed. 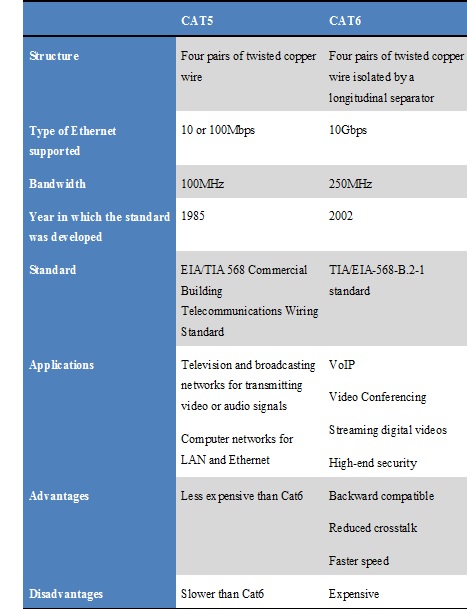