Television sets have seen huge developments and advancement since the days they were first invented. The oldest type was CRT television with big cathode ray tubes which made them thick and heavy. They had been around since 1922 but their sales have declined considerably in the last decade since more portable and light weight TV sets have become available. Introduced in 1997 by Fujitsu, plasma TVs have a lot of advantages over CRT. They are thinner, lighter and have flat screens that prevent distortion at the edge of the screen. But plasma TVs could not compete with LCD TVs on pricing. LCD TVs are far more energy efficient and their prices have come down since they were first introduced in spite of being available in large screen sizes. LCD TVs are the most widely sold TVs today and have taken over the high definition market. After plasma and LCD TVs, LED TVs come next in the story of evolution of television sets. LED TVs are an improved version of LCD TVs with many advantages but are more expensive. A discussion on LCD and LED TVs follows next.

What are LCD TVs

An LCD TV as the name suggests is a TV that has a liquid crystal display (LCD) as its screen. LCD TVs are slim and flat; and advances in technology now allow for wider viewing angles and higher-quality video images. LCD TVs can be mounted almost anywhere – on a wall, under a cabinet, or on a desktop.

Liquid crystals are a specialized state of matter that consists of rod shaped molecules having properties between that of liquids and solids. They can flow like liquids and crystallize like solids.

An LCD consists of two polarizing electrodes with liquid crystals between them. The screen's front layer of glass is etched on the inside surface to form a grid pattern for the liquid crystals. The alignment of liquid crystals can be controlled by passing electricity through it. Each crystal can align such that either light is allowed to pass through or it is blocked. The pattern thus generated by the liquid crystals along with the backlighting forms the imagery.

LCD TV is made of the following layers:

In an LCD TV, each pixel consists of three sub-pixels with green, blue and red color filters. In order to get better picture quality and 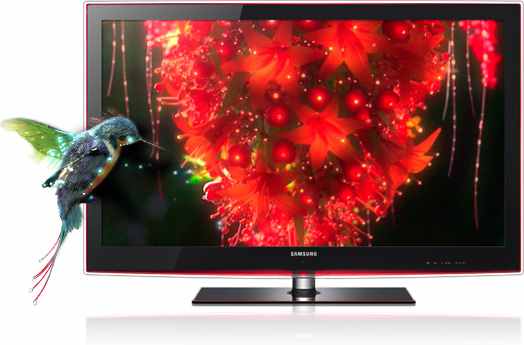 performance, it is required that the LCD's pixels can be rapidly switched on and off. For this LCD TVs make use of 'active-matrix' LCD, an advanced type of LCD which is based on thin film transistors (TFT). TFTs are a combination of tiny switching transistors and capacitors that are arranged in a matrix on a glass substrate and which control the switching on and off of pixels.

The speed with which an individual pixel's color can change without blurring is defined as pixel response time. This time must be fast enough to avoid the phenomenon of 'motion lag' or 'ghosting' which may be seen in the case of fast-moving objects on screen.

What are LED TVs

LED TVs are just an improved version of LCD TVs. In fact, LED TVs have exact same layers as that explained for LCD TVs. The only difference is in the source used for backlighting. LED TVs use an array of LEDs to light up the LCD screen instead of fluorescent tubes. Use of LEDs gives better picture quality. In an LED TV, even purest blacks and whites are clearer.

LEDs are special kinds of diodes which emit light. When electricity is passed through an LED, a current is generated by the movement of electrons and holes. When electrons and holes recombine, a photon is emitted. The photon emitted may or may not be in the visible region depending on the material used in the diode, for example silicon diodes emit radiation in the infrared region and not in the visible region. Diodes made from materials that emit photons in the visible region are called light emitting diodes. The color of light emitted depends on the material and the energy band gap between valence and conducting band.

As in the case of LCD TVs, the screen used in an LED TV is still an LCD screen only. The difference is in the backlighting; here LEDs are used for backlighting. That's why LED TVs are also called as LED-backlit LCD TVs. Electricity supplied to the LED TV controls the alignment of the liquid crystals and it is this alignment that controls how the LEDs' backlighting is transmitted on to the screen generating on-screen imagery. A technology called 'twisting crystals' is used in LED TVs to avoid burn-in.

LED TVS are expensive. They can cost as much as 20% more than LCD TVs.

The table below summarizes the differences between LCD and LED TVs: